As an MC, Entertainer or Speaker.

Timothy is one of Australia’s busiest and most accomplished Corporate MC’s.

His unique style and abilities has seen him engaged to be the MC at nearly 120  “Major Projects” 2 Day Conferences around Australia for ExpoTradeGlobal over the last 12 years.  He was employed by GDS International for 18 Executive Summits throughout South East Asia. In fact around 95% of his work is for repeat clients!

As well as running annual conferences for local corporate and association groups, many have seen the value in taking him with them when they conference overseas. He has facilitated events in the USA, South Africa, Cambodia, Hong Kong, Thailand, Australia and New Zealand.

With a background in Show Business he will bring some much needed Pizazz to your event! As an entertainer he’s toured as an opening act for both the legendary James Taylor and the dynamic KC and the Sunshine Band, but more people seem to be impressed with the fact he appeared with Mr Squiggle in several episodes of the classic ABC series.

As a Comedy Mentalist he performed on many of the highest ranked Cruise Lines in the world entertaining their high end clients. He’s been engaged on Crystal, Silversea, Cunard & P&O UK all over the world.

His peers also regard him as at the top of his game! He has been chosen by the National Speakers Association of Australia to be an MC at their annual convention every year  2003 – 2010 and in 2006 they awarded him the Walter Dickman Award for services to the Speaking Industry.

He is now regarded as a Global Authority on the MC business, a niche within the Professional Speaking Industry, and in 2010 set up www.ExpertMC.com  , an online training and resource site for people wanting to learn the skills of being an MC and/or building a business around that skill. His YouTube channel currently has over 17,500 subscribers. (July 2021)

He’s lectured and performed at many Speaking and Entertainment industry conferences in Australia, New Zealand and the USA including the famed Meeting of the Minds in the USA several times and has published a best-selling series of 17 books for professional performers.

He also has a series of Online Training resources available on Udemy and Listenable platforms.

Please follow the links above to learn more about –

You can view a series of Online Videos .

Timothy Hyde – The one stop solution for your next conference.

NOTE - Covid 19 has disrupted all Major Events in Australia. Dates below are left here for historical reference. Please contact us direct for availability once things return to some state of "normal."

Are You an MC or Speaker? 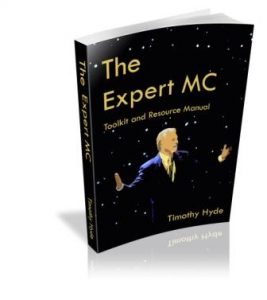 A 120 page collection of Jokes, Lines, Quotes, Activities, Stories and Filler material that you can slot into any MC assignment. These are the glue that holds your MC work together. Fun introductions for guest speakers, linking material and touching Thank You’s. PLUS Pages of Advice, Tips & Techniques to help you become a great MC!  This book has helped thousands of MC’s around the world. Click the image for full information.